Nine-year-old Paula was diagnosed with multiple Congenital Heart Defects (CHD) when she was just two and a half weeks old. It was then that we found out that she would need open heart surgery in order for her to survive to her first birthday. Paula's actual diagnosis is called Tetralogy of Fallot (TOF) which is a combination of four congenital abnormalities. The four defects include a ventricular septal defect (VSD), pulmonary valve stenosis, a misplaced aorta and a thickened right ventricular wall (right ventricular hypertrophy).

When Paula was just three months old and weighing less than eight pounds we handed her over to a
team of medical staff, virtual strangers had her life in their hands. This team was actually going to stop her tiny heart, a heart the size of a small walnut, cut into it and repair the defects. After a very long seven-hour surgery, the surgeon came out to talk with us. He said that the surgery went well, and they were able to get her pulmonary valve working, closed the additional holes in her heart they weren't aware of prior to surgery. He told us barring any complications he should never have to see Paula again and she would not need any further surgeries for her heart.

An hour later we were finally able to see her. Nothing can prepare a parent for what their child looks like after such intense surgery. Our tiny little baby had tubes and lines coming out of every possible spot on her little body. She had a machine breathing for her. It wasn't until the next day that we were able to finally hold her in our arms again. It was an amazing sight, our baby,who had been tinged slightly blue was actually a pink baby. She was so beautiful even at her most critical time.

After a roller coaster nine-day stay in the pediatric intensive care unit we took Paula home. At her follow-up appointment two weeks post op we found out that her pulmonary valve was not functioning as well as it should be and it was also leaking. Which meant at some point she would need additional surgeries to fix those issues. Her cardiologist told us that we wouldn't need to worry about that until she was a teenager or young adult. She went from seeing her cardiologist every week to eventually being an annual appointment. 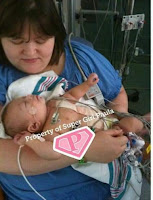 When Paula was almost four years old our family moved from upstate New York to Florida&#39;s Space Coast. We found new doctors and started her annual visits to the cardiologist. After the first visit, we were told we didn't have as much time until her next surgery and we would need to see the cardiologist more frequently to monitor her heart function.

Despite the diagnosis and the fact that she will be followed by a cardiologist for the rest of her life, our goal as her parents is to give her the opportunity to live a normal life. As part of that, we got Paula involved with a program called Team Impact.

This program connects children facing serious and chronic illnesses with local college athletic teams,
forming life-long bonds and life-changing outcomes. Paula was matched with Florida Tech's softball team. The team has been such a blessing to Paula. She has learned the meaning of teamwork and the team has taught her the fundamentals of playing softball while also being there for Paula and guiding her like big sisters. The coaches have impacted her in so many ways as well. They include her in practices, game day festivities, team bonding activities, and team dinners. They share her ups and her downs and are always there to spend time with her, cheer her up and encourage her.

Being a part of the Florida Tech family has been a wonderful thing for our whole family. You can watch Paula get signed with Florida Tech&#39;s softball team by following the link: https://youtu.be/PieOxjZVAIk

We learned in May that the time had arrived and our sweet girl will once again be undergoing heart
surgery. She will be having her pulmonary valve replaced and her tricuspid valve has also developed a leak and that will be repaired as well.