Eleutiza Ready to Turn Things Around at EFSC

The Eastern Florida State volleyball program has not enjoyed a lot of success on the court in the last handful of years. It is now up to Carmelo 'Melito' Eleutiza to change that. Eleutiza was hired in March of this year, taking over for Andrea Rasmussen who was 69-97, in her six years at the helm. 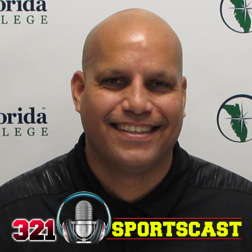 After winning 10 national championships in the open division of club volleyball, and spending time at Division II Bluefield State College in West Virginia, Eleutiza spent 2017 and 2018 as a volunteer assistant at the University of Central Florida, learning under head coach Todd Dagenais. “He helped me prepare for this opportunity,” Eleutiza said of Dagenais. “He told me what to expect, and what I have to do with this program to make it competitive.”

Eleutiza got his start in coaching at the age of 13, helping his mom coach at the club level in Puerto Rico. They coached together for many years, and he eventually worked his way up to coach a semi-pro league, with a team called Toa Baja, leading that team to a national title in 1998.
“My mom taught me so much,” Eleutiza said. “Without her, I would not be here.”
With all those accomplishments under his belt, it was time for Eleutiza to be a head coach. “I have done so much at the club level, and wanted to be challenged,” he said. “I liked the opportunity to turn this program around. This was a great opportunity to be close to family, and friends, and I am surrounded by great people here (at EFSC).”

The first thing Eleutiza did after being hired, was to meet with the freshmen to let them know that he was here to help them, and our goal was to turn the program around.
“I kept the seven players from last year, and I believe they are great kids,” he said. “I have a daughter around the same age, and I don't want to take scholarships away. I want to prove that we can win with the girls we have and make this program competitive.” That goes hand in hand with what the coach considers his biggest hurdle to overcome with this Eastern Florida State College team.  “I would say the biggest challenge is making people believe we can be competitive at the next level,” he said. “Because of past history, I don't think there is a lot of respect for the program. I understand that we need to improve our talent, and our record, in order for us to earn that respect, and that comes with our performance on the court.” 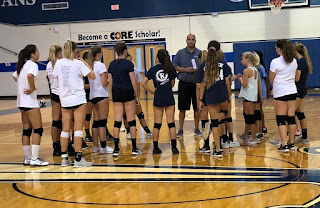 Part of that improvement has to do with recruiting, and Eleutiza said there were some challenges in recruiting as a new coach, but he enjoyed the process.  “It's tougher when the kids are looking for DI or DII opportunities,” he said. “Luckily, there is a big market of players at this level. I would say it's been a challenge, but it's been good. We finished our 2019 recruiting a few weeks ago, so we are now focused on 2020 and 2021.”

Now the focus is to improve the teams 5-17 record last season. “One of my biggest things was earning my players' respect,” Eleutiza said. “The players know my knowledge and background in the sport, they need guidance and need to learn what it takes to win a match. I want a program that can be successful on the court, and in the classroom too.”

When he is not coaching, Eleutiza enjoys spending time with his wife and two kids, as well as friends, and family. He will welcome a third child into the family in December. In his free time, he spends time playing video games, including MLB The Show, and NBA 2K.

The team officially starts practice on August 1, and their schedule kicks off with the Jamboree Preseason Tournament on August 17. They will play an exhibition match against Florida Tech on Tuesday, August 20 at 7:00 p.m., at the Clemente Center in Melbourne. The Titans full schedule can be found here.  (by Donny Rieber & 321sportscast)