Twins Xiarysse and Shanysse Emerenciana played college softball on the same field. They played two years at Palm Beach State College, before spending the last two seasons playing softball at Florida Tech. Their college career culminated in an unforgettable season, that included a 2019 Sunshine State Conference championship, the first in school history, and a run to the Division II South Super Regionals. “This past season, we set the goal and we went for it,” said Xiarysse. “Nothing ever stopped us. 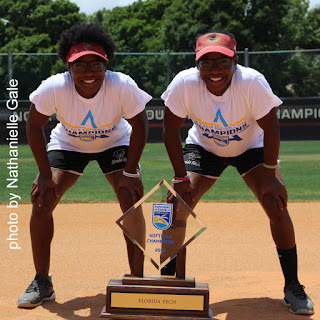 I straight up told coach (Val Silvestrini) this was going to be a record-setting season and I was happy that at least we won the conference.” Shanysse was second on the Panthers in batting average this past season, hitting .326, had 46 hits, and led the team with an OPS of .940. She was 13-for-16 in the stolen base department. Xiarysse hit .277 with 48 hits and led Florida Tech in steals, going 38-for-41.

Reflecting back on her time at Florida Tech, some of the lessons Xiarysse took away, were invaluable and she wanted to be sure to thank Florida Tech and her coaches for the opportunity to play at Nancy Bottge Field. “This was the best coaching staff and teammates I've ever played with,” she said. “Coach Val was a good coach and taught us to trust the process. She taught us that planning things out is pretty important and so is time management.” In January, coach Silvestrini told the twins about an opportunity with a new league called the American Softball Association (ASBA) out of Mobile, Alabama in January, and they signed up for the four-team league in May. 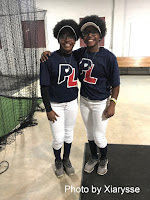 The draft was held June 5, 2019, and Shanysse was drafted by Performance Lab with the third pick in the 11th round. Xiarysse went undrafted, and the reality of not playing together was a real possibility. Shanysse did not want to play without her sister, but Xiarysse told her that things happen for a reason, and to pursue her dream. The following day, the coach of Performance Lab called to tell Shanysse to make sure her sister got a flight as well because he just picked her to be on the team. “It was a dream come true for us,” Xiarysse said. “We had always hoped to play together professionally but weren't sure it was going to happen. I am so glad it did.” It was a smart decision for the Performance Lab coaching staff, as through 15 games, Xiarysse is leading the team with a .423 average. She has 22 hits in 52 at-bats and has scored 11 runs. She has four steals in five attempts. Shanysse is hitting .302 with 16 hits in 53 at-bats. She too has scored 11 runs and has two home runs. She is 5-for-5 in stolen base attempts.

The ASBA season started June 16 and runs through July 30.

The Performance Lab team is in the midst of a fundraising campaign to help with equipment and travel expenses. If you would like to donate, please click the link below. Your help is greatly appreciated.
Performance Lab Fundraiser

After the Emerenciana's wrap up the season, they will return to Florida Tech and get set to graduate in December. We wish them the best in their future endeavors.  (by Donnie Rieber & 321sportscast)